We never changed our locks after moving into the house five years ago. I did think about it, after all, it’s a very good idea, but it was never a high priority. Finally, sometime this summer I managed to lose my keys, including our only house key. We just didn’t lock the doors for quite a while, included at least two weekends away… Obviously this is a problem and a couple weekends ago I decided it was time I did something about it.

This little project was another example of things starting out well. We went to the store, quickly settled on a new door knob, and went home right away to install it. The old one came part pretty easily. The instructions for putting the new one in were minimal but easy to understand. The latch face-plate didn’t fit perfectly but I found that if I just pushed it forward and tightened down the screw then it worked. And it did work perfectly… for about a period of 24 hours….

The next day, suddenly, the bolt just wouldn’t catch anymore. If I pushed the face-plate forward again that fixed it… For another day or so. And before too long even that wasn’t working any more. We would wake up in the middle of the night or come back home and find the door hanging wide open. Not an ideal situation. One night, a particularly windy night that kept pushing the door open, before bed I closed our archaic but functional deadbolt. The next morning when I opened the deadbolt I found the door perfectly latched! I opened it and closed it again and it latched again! 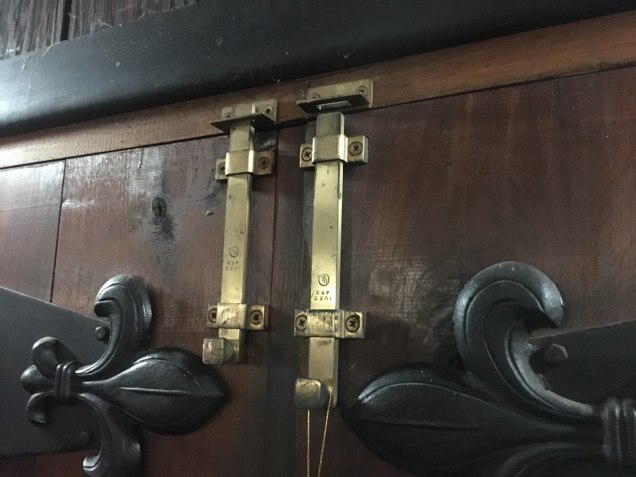 Now, I’m not perfectly clear as to why leaving the deadbolt in seems to heal our door. They aren’t near each other, so they can’t directly affect one another. But I do have a theory. To line up the deadbolt with it’s latch you have to really, really push the door into the frame. It’s difficult enough that The Fair Piper can’t manage it and even I have to push with nearly all my strength.

Now, one might think that just pushing the door extremely hard is enough to line up the knob to its face-plate but that doesn’t seem to be it. If you close the deadbolt and then immediately release it the door will not stay closed. Instead, you need to leave the deadbolt in for several hours. I think what’s happening is that during the temperature change the wood will contract and expand and at some point during this process it will line up the door knob bolt with the face-plate and it will go it. At that point it’s “locked in” and even when the wood continues to expand and contract, the bolt keeps it from going anywhere.

This ultimately forces to door into the perfect shape to easily close and be lined up with the face-plate. And if no one forgets to close the door it will continue to work properly. Every once and a while we might leave the door open, perhaps it’s sunny, or a guest forgets to shut it, but even then, we just close the dead bolt for a while and the door is fixed again!