The following weekend after removing the old toilet I got a chance to try installing the new one. In theory it seemed simple. Put the wax ring on the bottom of the toilet, place it on the floor, bolt it to the floor, then attach the tank. Well, it ended up taking a total of another 4 hours of work over 2 days.

The first thing I tried doing was just simply sitting the toilet on the ring to make sure it fit. That was when I realized my first problem. The hole cut into the carpet was much smaller then the base of the new toilet. Basically, it should be sitting on the wood subfloor, but was instead sitting on the carpet, pad, and tack strip. I tried finding some info on how to handle this online and managed to get myself worked up. I was thinking I was going to have to tear out the carpet and pad in the whole bathroom! This was getting out of hand! All I ever wanted was to unclog my toilet!!

Once again I called upon my Uncle from Arizona and he told me that all I needed to do was removed the tack strip, remove the pad under the toilet base and then I could install the toilet directly over the carpet, which actually helps keep the carpet in place. So, that’s what I did, which was not a pleasant job considering that this is where the water overflowed to, but I got it done. The strips came up fairly easily with a crowbar and I started out trying to cut the pad precisely with a utility knife but that devolved into me ripping out hunks with my hands.

Next I needed to install the wax ring and place the toilet on the floor. This part went pretty smoothly. I watched another YouTube video to make sure I installed the ring the right way then just jammed it on and put the toilet down. Actually, it went well enough that I’m suspicious that I did something wrong. A week down the road and I’m still checking for moisture around the base, but nothing yet.

Next comes bolting the base to the floor, which sounds easy enough. To understand what went wrong, you have to realize that the toilet came in two separate packages. The base was wrapped up in one section and the tank in another. I made the, apparently foolish, assumption that all parts related to the base would be with the base. The odds-and-ends packet with the base included two new bolts (I correctly put those in before placing the toilet down), two metal washers, and two nuts. Seems like everything you need to bolt the tank down, right? So that’s what I did. I stopped tightening the nuts down when the metal washers began deforming and getting pushed inside the base opening. I figure something was wrong but the base wasn’t moving, so I didn’t worry about it.

When I opened up the tank part I found a second odds-and-ends packet. This one had three more bolts, obviously for attaching the tank to the base, three brass looking washers, presumably for the same thing, odd looking nuts, which I guess must be for that too, and then two sets of plastic parts that I had no idea what they were for. The first set of plastic parts was dome shaped and it didn’t take me too long to figure out that those were the caps that were supposed to cover the floor base bolts. Of course there where no instructions on how you install the caps. One idea I had was filling them up with glue and sticking them to the bolts, but that didn’t seem like a very elegant solution. The other plastic parts were washer-like things that had written on them “this side up” on one side. Those things I weren’t so sure about. I wondered if they were special washers designed to keep me from tightening the tank bolts so hard that I broke the tank, but then what were the brass washers for? Should I use them in conjunction somehow?

I guess my first clue was when I realized that the caps, which were in the tank odds-and-ends packet, actually belong to the base, so maybe the plastic washers belonged there too? Then I looked at my deformed metal washers on the floor bolts and managed to put two and two together. Oops. None the less, I watched another YouTube video to confirm my theory. I suppose I should have taken parts inventory from the very beginning and this wouldn’t have happened, but really, why can’t they put all the parts that go together… together? Seems like that would just make sense. Now, as a side note, it turns out that the plastic washer is the bottom to the caps. So when all is done you can just stick them together. No glue required.

So I undid the nuts on the floor bolts and had to bend the washers back into shape. And it was about this time that I went to the garage to get my wrench set because I had been using a cheap adjustable wrench and it was really starting to annoy me (it kept coming loose every time I turned it). When I got back I laid everything out and found the correct size wrench to use. I put down one plastic washer, placed the metal washer over it and started tightening. I went to grab the next set… and the metal washer was missing. I looked all over the bathroom floor, moved everything, then moved it back several times and couldn’t find it. What I think happened is that I put my knee on it and it stuck to me and when I went to the garage it fell off somewhere along the way. I spent at least a half hour retracing my steps in hopes of finding it, but never did.

I’m sure I could have gone to the hardware store and gotten another identical washer, but that would have required undoing the one I’d already gotten down (so I could match them), then driving there (which is 20 minutes away, if you remember), and at the time, that was just asking too much. So I installed the second nut with only the plastic washer. And so far it seems okay.

Next was installing the tank. That part actually went pretty smoothly. I took an extra long time slowly going back and forth between the three nuts to make sure I was screwing them down consistently and occasionally checked my level to make sure it was on straight. Towards the end I started worrying that I might be overtightening it but after a couple text messages of reassurance from the Uncle I figured I had it done right. Last was just to connect the water supply line and then the seat, which was pretty easy. 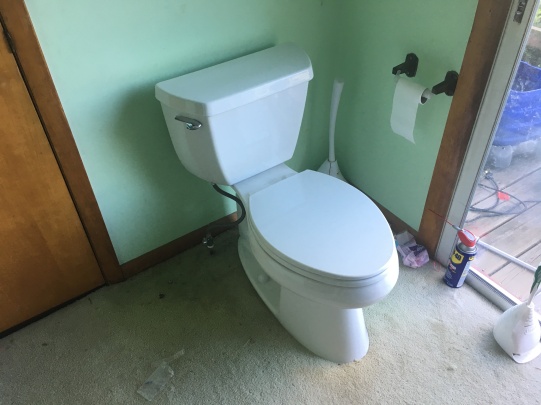 Finally the ordeal was over. In total the replacement from start to finish took me about 8 hours. My co-worker told me that it should only take about an hour to do. But either way the job is done and there are no leaks! That’s one less project on the list!

Okay, so maybe there’s one last detail to take care of… But I’m sure I’ll get to that eventually…