The other day (maybe a couple weeks ago…) the toilet overflowed. None of our toilets had given us any troubles before so I suspect that Firecracker dropped something in there and it was flushed without being noticed. In the past, my Uncle from Arizona, who is a plumber, has always helped me get going with anything plumbing related but I thought this might be a job I could handle. After nearly a day of plunging without success I went and bought an auger (basically a snake) and promptly got it stuck in there. Seriously stuck. I tugged and pulled and it was just not moving.

After talking to my Uncle I figured at the very least I would have to disconnect the toilet and more likely have to replace it. I started early this morning with the thought that if I could just cut and cap the supply line then I could be off to a picnic (literally, we were supposed to go to a family reunion today)!

I shut off the water, cut the line, and grabbed my push fitting only to find that it wasn’t the right kind. It was a 1/2″ to 3/8″ conversion but only pushed on the 1/2″ side. This was a problem, if I went to the hardware store, got the line capped, toilet removed and then found out that I couldn’t get the auger out I’d just have to go back a second time to get a new toilet too. And I didn’t want to have to go twice! So I ended up pulling the toilet off right away and sure enough the auger was still stuck. Okay, that meant I needed a new toilet too. 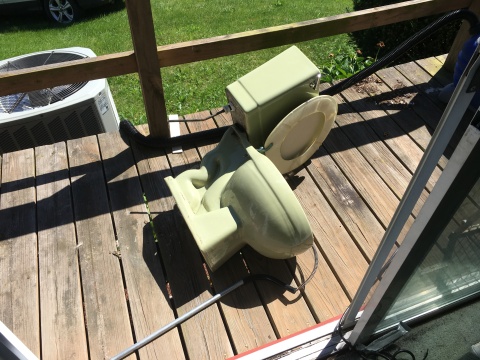 I had used the push fittings before, so I pulled it out and jammed it onto the pipe… and it wouldn’t stay. I figured, maybe the pipe got squished when I cut it so I grabbed a drill bit and used it to enlarge the pipe. Still didn’t work. Enlarged it some more… Nothing. Finally I read online something about taking a plastic part out of the fitting, which I tried to do. I still don’t know if I was supposed to take it out or not, but in any case I definitely broke the fitting.

Aaaaaaand it’s off to the hardware store once again. Did I mention that it’s about 25 minutes away? I called my Uncle again and he told me to use a compression fitting instead and that I had probably damaged the pipe while trying to resize it. I get the new fitting and an extra one, just in case. That’s another $25 and it’s back home. When I try the compression fitting it doesn’t fit either! After fighting with it for a while, feeling more and more desperate, I finally cut off the top 1/2″ of pipe. After that it slipped on without any trouble. So I guess that means I did manage to break the pipe.

So after a good four hours I finally managed to get the line capped and I called it a day.

One thought on “I Broke My Toilet”