One of my hobbies for a while now has been fermenting hard cider. A while ago someone asked me what was the point when you can buy very good beer/cider from any store? Well, because it’s fun and you get to drink it when your done! It gives you things to do and to learn. In fact, if you are so inclined, you can expand into biology and chemistry from the basics of home brewing. When Firecracker gets older I’ll enjoy teaching her all this while she helps me (not with the drinking part, mind you!). In the meanwhile I need to continue attempting to perfect my craft.

From less than $20 of apple juice you can make 5 gallons of cider. That’s about 2 cases worth. For today’s project I used a recipe found online, EdWort’s Apfelwein.  Apparently this is an award winning cider, which is interesting because the recipe is not very different from what I’ve made in the past… which, although enjoyable, probably wasn’t going to win any awards.

You will notice from the photo that I’m using store bought apple juice. When I first started learning about cider I read a lot of negative comments about this. Folks would say that good cider would only come from fresh pressed juice. That is not true! Very good cider can be made the cheap stuff. And it’s easier to find. Where we live, in northern central PA, we actually have a number of cider mills around us but they only press for a couple months each year. It’s nice when you can get it but don’t let it stop you if you can’t!

The process is very simple. The first thing you need to do is sanitize your equipment. Anything that touches your juice will need to be sanitized so that no rogue bacteria can infect your cider. Once that’s done you pour your apple juice into your fermentation bucket/carboy, add some yeast, close it up, and wait. It’s that simple! …Okay, there’s maybe a little more involved in it, but not much. 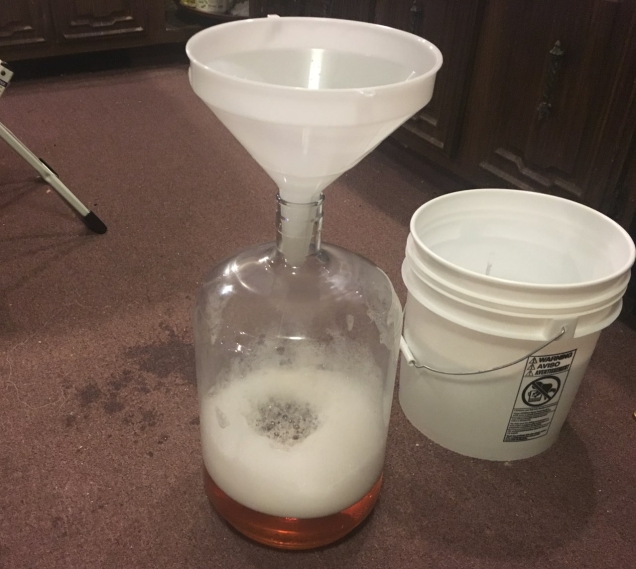 This time was the first time that I tried using a carboy instead of a bucket. In the picture above the carboy is the center vessel, the one with the funnel, as opposed to the bucket next to it. I had some trouble with getting my yeast into it. The yeast stuck to the bottom of the outside of the funnel and I had to be very careful getting it off without accidentally exposing it to outside bacteria. I think I was successful but we won’t know for sure for another 4 weeks.

The tapered neck of a carboy is designed to minimize the amount of oxygen that can reach your beverage. Oxygen is actually harmful to alcoholic beverages, it basically causes them to go stale. Now, like I mentioned, I’ve never used them before. The initial fermentation process gives off so much carbon dioxide that it naturally keeps the oxygen away, even when using a wide mouthed bucket.

On top of both the carboy and the bucket is an airlock that makes sure the oxygen can’t get back inside after the carbon dioxide has pushed it away. From the photo above you’ll see that my juice is actually up into the neck of the carboy… It’s really not supposed to do that. In fact, as the fermentation process really got going I found some juice even got pushed into my air lock. That’s a problem. I’m not sure yet how big of one, but it is. If I’m lucky it won’t cause an infection but there is no doubt that it will increase the chances. Next time I’ll just stick to the bucket and only use the carboy for very long term projects.

So that’s a little bit about cider making. It’s easy, fun, not too time consuming, and very tasty! Later on we will discuss the bottling process, which is another important part of home brewing.