Our house is a little weird. It’s not any bigger than your average house but for some reason they built it to be serviced by two different water heaters. The kitchen and master bathroom have one and the hall and guest bathroom have another (yes, despite having three bathrooms the house really isn’t all that big). The second water heater hasn’t worked for a very, very long time. This meant that guests had to wash their hands with cold water but otherwise it didn’t really affect anything so we didn’t worry about it. Now recently we had some family spending a few nights at the house. That left us with two options. Let them use the master bath (which still has a hole in the wall from an earlier project) or get a new water heater. We decided on the new water heater.

I replaced the main water heater about a year or two ago. I did have my Dad’s help but it went fairly smoothly so I figured this would be pretty easy… But of course, I was wrong. I guess it wasn’t as bad as the toilet project but still took way more effort than it should have. 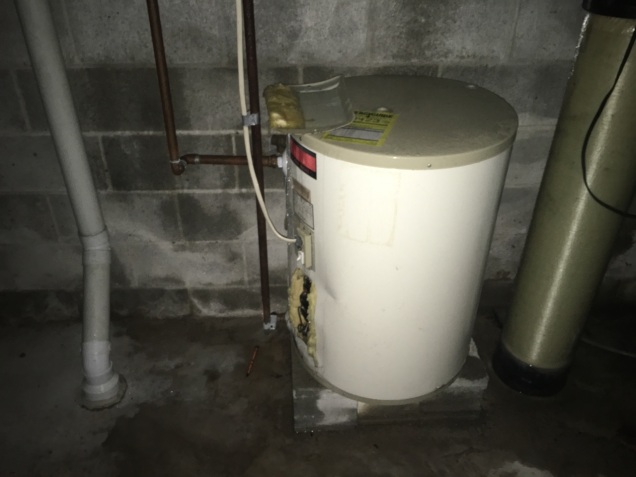 The old water heater was a low boy (a short water heater) so I bought one of those to replace it. In retrospect, this was unnecessary. I have the room for a tall one and the low boys are just as expensive as the tall ones. I may have been able to get a larger tank for pretty much the same as I paid for a short one had I done more research. Aside from the tank, I also needed water lines and a board to place under the water heater (a wood board helps cut down on corrosion, how is not really known but probably has something to do with static electricity). You can’t see it in the photo but there is a shut off valve on the pipes above the old tank so I didn’t think I needed a new one of those. So just a few things I needed. Off to the store I went and grabbed everything… except the board.

I got home and started promptly. I shut off the water, cut the line, and let the old tank drain. After it finished draining I found that my shut off valve wasn’t shutting off the water! It was leaking, not fast but enough to be a problem. I stood around glaring at the dripping pipes for a while before deciding to just ignore it and finish the job anyway. I cut the last of the pipes and freed the tank. I dragged the new tank over, rearranged the blocks (the new tank pipes connect at the top and not the side) and was just about to put the new tank into place when I realized I’d forgotten the wood board! So I stood around and glared at the dripping pipes and glared at the board-less blocks and after a while decided that I had to give up and go back to the store.

Mind you, it was getting late and the store is a long ways away so the pipe just dripped all night long. That’s probably not the most responsible use of my water supply… but the store is really far away! Anyway, the next day, bright and early, I went back, picked up a board and a new connection line with a built in valve, and got back to work.

From here it was pretty simple. Place the board down, put the tank on top, screw on the connection hoses, attach them to the pipes, fill up the tank, connect the power lines, and turn it on! And that was it, I had hot water in the bathrooms! I was pretty proud of myself, I got it running with out needing to ask anyone for help. Sure I had to go back to the store once, but that’s not terrible. Nothing major went wrong at all! It went as well as I could possible ask it to! Simple! Not a problem! …Then my uncle used the shower… 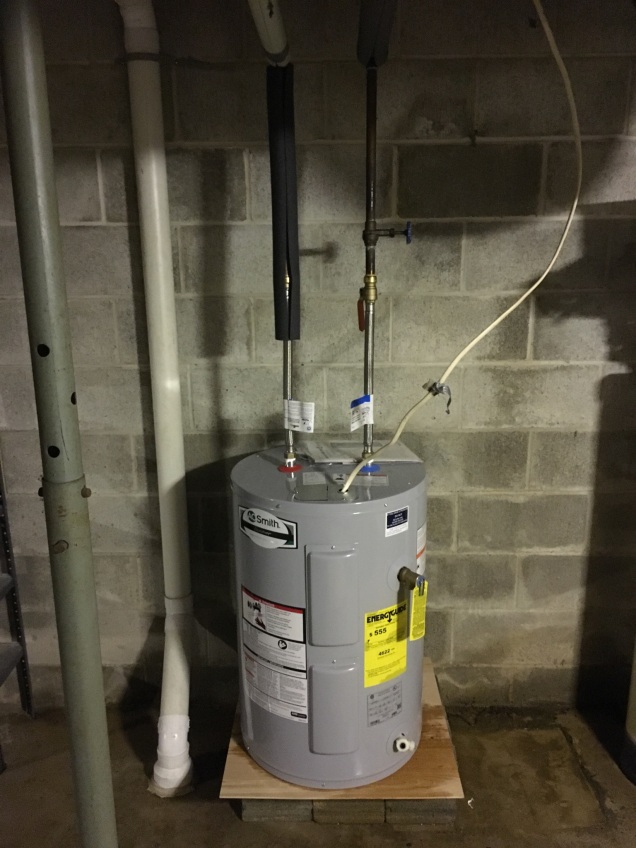 To clarify, one of the family members who was going to be staying at our place was my uncle from Arizona, the plumber. That’s one of the reasons I wanted to do this job with out any help. I wanted to show off. Well, he took a shower and reported that he ran out of hot water very quickly. We went down and poked at the new heater and he determined that it was most likely a burned out heating element.

For those of you who don’t know too much about water heaters, most heaters have one or two rods (the heating elements) that heat up (just like your toaster) to cause the water to also warm up (like cooking your toast). It is very common for people to cause one of these elements to burn out by not filling the tank completely before turning it on. Basically, the element heats up without being surrounded by water to transfer the heat too and it pops like a burned out light bulb element (hmm, maybe I should have used the light bulb analogy earlier).

I am happy to say that I am not one of these people! The element that wasn’t working was the lower one and the upper one was working fine (you can’t fill the top of the tank without filling the bottom!). We went back to the store and bought a new element and some parts for my guest shower head (that’s got nothing to do with the water heater, apparently my uncle just didn’t like my shower head) and headed home.

Switching out the elements is kind of cool. You open a hole in the side of the tank, pull out the old element and slip in the new one. You would think that all the water would come out in a rush but, as long as you keep all the facets closed, the water stays put (or at least most of it does). It’s like when you play with a straw! Put your finger on the top and pull the straw out of the drink and the soda stays in there. Take your finger off the top of the straw and all the soda falls out (hopefully back into your cup). Without going into any detail, this is due to air pressure and surface tension (physics!) and it allowed us to change elements without getting very wet.

The new element worked fine and even with three people taking showers we didn’t have any shortages of hot water. I guess as far as my projects tend to go this one wasn’t too bad but I really hope that when I replace water heater number three (hopefully not for a very long time) it will finally install with out any problems at all. …I imagine that’s just asking for too much.